Rodge wrote:Man, I so love what you wrote about the now late GIANT Chick Corea, beautiful. 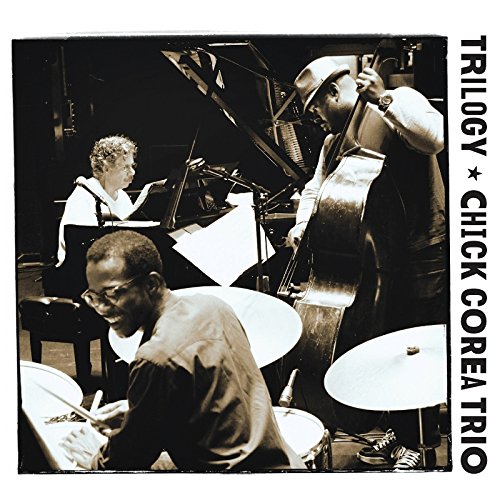 I've got this too, and I am amazed that more people aren't talking about it. 3 CD's of Chick, Chris, and Brian just burnin!

Chick has played (and recorded as a leader) trio with so many wonderful (and DIFFERENT!) drummers, I mean just think about it: Barry Altschul, Roy Haynes, Jack, Airto, Ballard, Weckl, Vinnie, Richie Barshay, Grady Tate, Blade, Gadd, Motian, Lenny.... And that's just the TRIO stuff! What a wonderful musician.

He always manages to allow each drummer to bring out different aspects of his (Chick's) own approach, while making the specific drummer (and bassist) sound great. The musical conversations he has are so singular and so rooted in the moment. He is so transparent within the music, and he really allows people to "be themselves" within his concept. Yet no trio ever sounds "restricted" to any paradigm or approach, and every trio sounds sooooo different (as well they should.)

Chick is so free within the music it's just stupefying, he is always playing WITH the musicians that he is playing with AT THE MOMENT, (if you know what I mean.) He's always so completely in the moment! He let's the musicians around him influence how and what he plays (of course) while retaining such a strong voice that is so uniquely him.

Sure a lot of this might seem painfully obvious, but it's so enigmatic how he approaches everything with such a wonderfully empty mind, and retains such a strong musical voice.

I really pay close attention to everything (anything) he plays on, and there are VERY few musicians I can really say that about. Whether he is playing with Blue Mitchell, Sonny Stitt, Mongo, Donald Byrd, Circle, Miles, Pete Yellin, Electric, Acoustic, Solo, with an orchestra, whatever... I'm paying attention, because I will play with him someday.

I've often thought about making a playlist or a mix CD of him playing the same tune with a bunch of different trios. What an interesting study that would be!

And the last time I talked to him, I asked him what he was listening to, and without pause he replied, "The Beatles!"

I'll stop.
Back to the wonderfully talented Brian Blade!
I love music,
MSG

Chick was a special cat, and brought such joy to creating music. It's sad to see another one of my favorite musicians pass away. But I am grateful for all the wonderful music that he left us, and very grateful for the fact that the last few times I saw him, he actually recognized me. I can still hear his heavy Boston accent saying "Maaaaark Right?"

I'm even more (personally) grateful for the one time that I got to play (granted for only 15 mins) with him and Jack DeJohnette (both playing piano) and me playing Jack's drums. They were both complimentary ("Yeah man!") That's all I needed, it still makes me smile, and it was many years ago.

He was just such a cool guy! Open and unbiased, I mean check this out.
In all of the tributes that I have seen about Chick, no one has mentioned this.

Granted it was probably the idea of some suit, but Chick (and Grohl) attacked it with class, musicality, and vigor, and it probably happened with minimal rehearsal time. The beginning duet-ish section is nice and works nicely, but when Chick goes into the locked hand block chords at the end with the band, he has really found "his place" within the tune (not an easy fete with three (!!!) rhythm guitar players,) and he contributes nicely.

No, it's not one of may "fave performances" of anyone involved, but it's class and musicality personified!!!!
And they're having FUN!
MSG

(sorry, Back to Brian!)
Now of course there is a SECOND Triology "2" recording with Chick, Chris, and Brian (two more CD's!!!) tearing it up! And the musical relationship between them has grown even deeper. Whew!

nomsgmusic wrote:Now of course there is a SECOND Triology "2" recording with Chick, Chris, and Brian (two more CD's!!!) tearing it up! And the musical relationship between them has grown even deeper. Whew!

Holy crap! I was not aware of this second Trilogy record. Purchasing now...

Always get back here !!!

I come from Tain, Vinnie, Omar, Jeff, Fish, Stewart, and many more...
Top

Jon Cowherd, Patitucci & Blade
with contributions from Chris Potter and Alex Acuna
Been listening to this album for the last week or so (bandcamp made the download available a week early).

This track is actually titled Grand Mesa - and is the opening track....great playing from Potter:
Top